There are many benefits in changing to the newest version of the TLS specification.

One significant difference you will notice is the reduced number of round-trips when performing a full handshake. Older versions of the TLS protocol require two complete round-trips before the client sends the application data. With TLS v1.3, only one round-trip is required! Additionally, the server can send application data in response to the client’s first handshake message! This means network latency has less impact on the time required to establish a secure connection.

Another difference is the way session resumption works in TLS v1.3. Previous versions of TLS have the client send a session ID, which the server has to look up in its cache. If there was a match, then they used the same security parameters. This old way of doing things was a very simplistic mechanism that requires sharing of state on servers.

TLS v1.3 makes a significant improvement by re-purposing the ticketing system tacked onto older versions of TLS. The server sends the client a new session ticket after the handshake is complete. This ticket, a blob of data to the client, can be a database lookup key like the old session ID. Alternatively, it can be a self-encrypted and self-authenticated value that contains the data for the previous connection. This means the server can be stateless!

Finally, the specification has been evaluated by cryptographic experts in efforts to prove the security of the protocol. While no security proof is perfect, the previous attacks on renegotiation, protocol version downgrading, compression, CBC and padding have been mitigated and the protocol is more resistant to attack.

TLS 1.3 was defined in RFC 8446 in August 2018. TLS 1.3 contains improved security and speed. Major differences include the following: 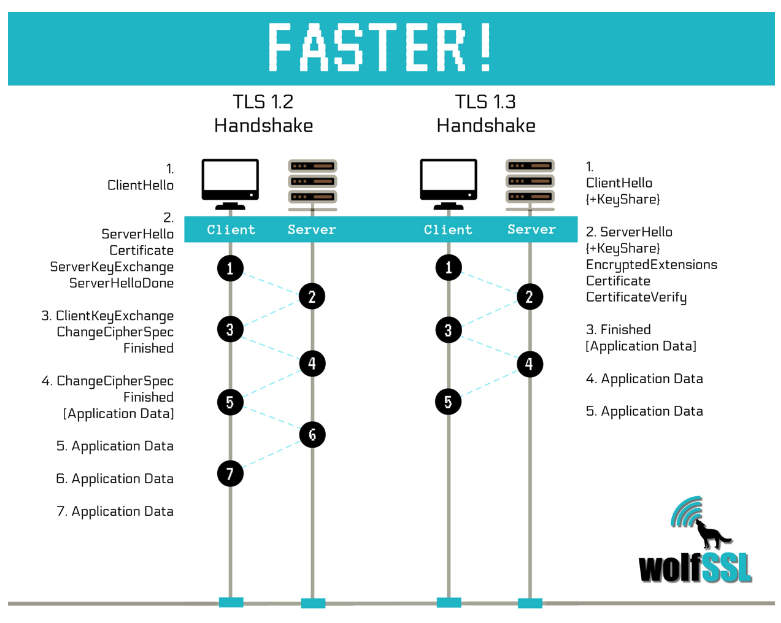